The Samoa Meteorological Service says a tropical depression off Samoa is expected to develop into a category one tropical cyclone within the next few hours. 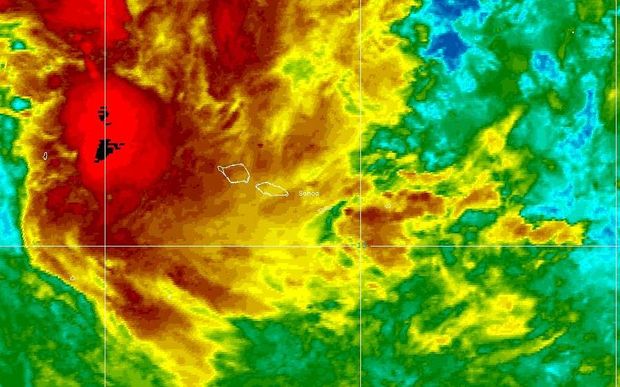 The system develops to the northwest of Samoa Photo: US National Weather Service

The system continues to move east-southeast at 27 kilometres per hour and is slowly intensifying.

Its expected to relocate about 364km west of Apia by 2pm local time.

There are reports of people being evacuated from some areas in the capital Apia which are prone to flooding.

He says local authorities are concerned about the heavy rain associated with the system.

"Which can trigger flooding of all vulnerable areas, for example the rivers, roads and water drainage and all those areas prone to flooding. In terms of observations, the amount of rainfall over the 24 hours is well above the threshold of heavy rain. We expect the conditions to worsen in the next few hours."

Luteru Tauvale says they are not expecting a direct hit but the wind and rain associated with system will create problems.

The Met Service says a wind advisory remains in effect for all of Samoa.

It also says a heavy rain warning remains in effect for all of Samoa and flooding is likely in vulnerable areas.

A warning is also in effect for small crafts and alia fishing boats due to high waves and strong swells.

The US National Weather Service has issued a tropical storm watch for neighbouring American Samoa.

American Samoa Department of Homeland Security emergency management officials are advising the public to remain on alert and secure loose items as necessary.

Forecasters say a tropical storm watch remains in effect, along with a flash flood watch. It also added a Gale Warning for the territory's coastal waters.

Tonga also issues a warning for the tropical depression.

It says the tropical depression was about 315 kilometres north of Niuafo'ou at 1am local time, moving east-southeast at 20 kilometres per hour, and slowly intensifying.