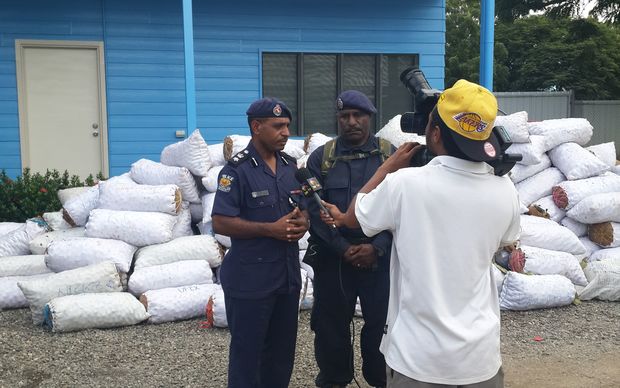 Police in Papua New Guinea's capital, Port Moresby, have confiscated a record 1,000 bags of betel nut in a dawn raid in Hanuabada.

Police estimate the bags have a street value of more than 180 thousand US dollars, with each 10 to 25 kilogram bag selling for up to 200 dollars each.

No one was arrested in the raid, which police say was part of a cleanup effort ahead of next month's Pacific Games.

The Metropolitan Police Commander, Andy Bawa, says the betelnut belonged to Mekeo traders who had smuggled the bags by dinghy to a coastal village west of the city.

Betel nut has been banned in Port Moresby for two years, but vast quantities are smuggled into the city, with coastal Motuan villages becoming havens for smuggling operations.

Yesterday's raid angered Hanuabada villagers, who barricaded the road which leads to the city's fuel depots, forcing businesses to stock up on fuel supplies fearing a repeat of a blockade in late January that almost paralysed the city.

The road block was eventually removed.