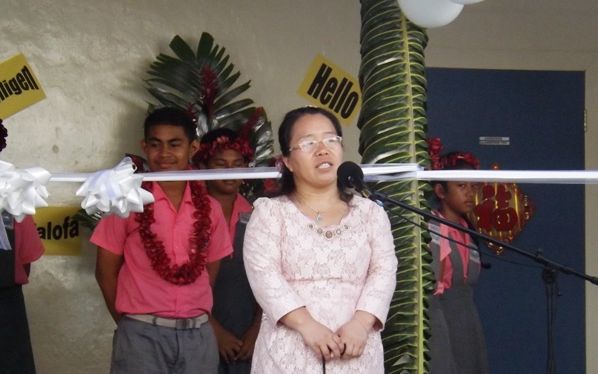 A Chinese language teacher speaks at the opening of the Samoa School of Language Photo: RNZI / Autagavaia Tipi Autagavaia

The Samoa government has opened a school for foreign languages.

Three language teachers from China are already in the country to kick off the school with learning Chinese to be followed by other foreign languages such as Japanese, German, French and Samoan for non-Samoan speakers.

Speaking at the opening of the Samoa School of Language, the Prime Minister, Tuila'epa Sa'ilele Malielegaoi, says this is the opportunity for anyone of any age to learn other languages so they can communicate and share other people's cultures.

"Some of our young people who go on scholarship, to countries like China and Japan, can no longer feel threatened by the communication barriers because they can learn these languages before they leave."

Tuila'epa Sa'ilele Malielegaoi has also announced that the Samoa Tourism Authority will financially support to 30 students who cannot afford the cost of the language school.