An English film maker now living in Australia says he hopes his new animation on the plight of asylum seekers on Papua New Guinea's Manus Island will raise international debate on the issue of detention. 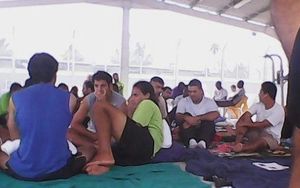 Lukas Schrank says he was inspired by an Australian government comic distributed like propaganda in Afganistan aiming to discourage people from going to Australia.

He says it has been very hard to find out what is happening on Manus and he hopes to give the refugees a global voice through animation.

"There's about five or six of us working kind of all around the world. There's two of us in Australia, there's some people working on it in India, the Philippines, and Romania as well. So each person has a very niche job. Like I have one guy just doing trees and sky. And there's one guy just doing characters. And I'm kind of putting everything together and working on the environments as well."

Lukas Schrank says he hopes the film entitled 'Nowhere Line: Voices from Manus Island' will be available online by the end of March and he may also enter it on the festival circuit.