Four of Vanuatu's political parties say they will run as a coalition in next year's election and will reform as a single party by 2020. 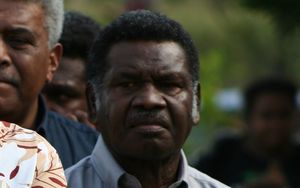 After years of destabilisation, some of the countries' veteran politicians say they are burying the hatchet for the sake of unity.

The Vanua'aku Pati, established as the first political party in the country, split in the 1990s and the resulting minor parties have contributed to Vanuatu's political instability and minority governments since. At a meeting late last week, the leaders of the Vanua'aku Party, the National United Party, the People's Progressive Party and the Melanesian Progressive Party set up working committees to start looking at a new structure and constitution. They will also have to agree which of their candidates they will stand in the 2016 elections, under a united banner. The leaders, all former Prime Ministers - Edward Natapei, Ham Lini, Sato Kilman and Barak Sope say they welcome the Political Parties Integrity Bill and a proposed referendum to ask citizens to approve a moratorium on motions of no confidence following elections.