The vote to elect the Prime Minister in Tonga will take place next Monday. 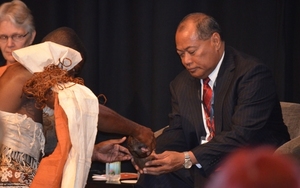 The caretaker Deputy Prime Minister of Tonga Samiu Vaipulu, is a hopeful for the post of Prime Minister, and is said to have the backing of the nobles. Photo: SPREP

The Interim Speaker Lord Tupou has called the meeting of all 26 elected representatives for that morning at the Parliament House in Nuku'alofa.

Representatives will give speeches in support of either of the two nominated candidates with a secret ballot to follow.

A winning candidate must get more than half the votes and then his appointment must be approved by the King.

The nominated representatives will be revealed on Monday but earlier discussions indicated the two nominations would be People's Representatives Samiu Vaipulu, an independent MP believed to also have backing from the nobles, and the leader of the Democratic Party, Akilisi Pohiva.