The Nauru government has strongly denied reports that schoolgirl refugees have been attacked by Nauruan boys. 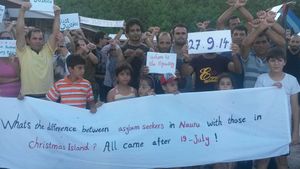 Yesterday, the Refugee Action Coalition said the latest attempt to intimidate refugees involved 15 boys setting upon the school classroom, where more than 100 asylum seekers have been encouraged to mix into the local community, after having their refugee status accepted.

The refugee group says one suffered bruising and windows were broken in the attack.

But the Nauru government says there is no truth to the allegation and nothing has been reported to the police.

The government says the report is part of an ongoing campaign of the Refugee Action Coalition to spread lies and advance its political agenda.

The government says it is committed to the resettlement program for refugees and they enjoy safety and freedom while guests in Nauru.