The Australian-based Refugee Action Coalition says a refugee on Nauru has been ordered to quit his job or he would be killed. 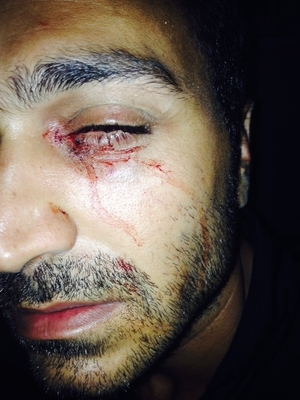 The Refugee Action Coalition says Iranian refugee Mehrzad has lost most of his vision after being attacked on Nauru. Photo: Supplied

This follows the distribution of a letter issuing threats against the refugees.

The letter, attributed to a group called the Youth of the Republic of Nauru, speaks of the refugees taking jobs, having relationships with local women and threatening the culture of a conservative country.

The Coalition's Ian Rintoul says there have been at least 10 violent attacks on refugees in the past three weeks and there is no response from police.

He says an Iranian refugee attacked earlier this month leaving him with compromised vision may go blind because of a lack of medical facilities on the island.

Mr Rintoul says the letter shows Nauru is a dangerous place for the refugees and that neither the Australian government nor the Nauruan government can guarantee their safety.