Vanuatu is looking for the European Union to assist as it prepares to host the Commonwealth Heads of Government in 2017. 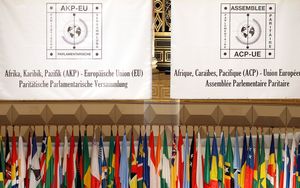 The President Baldwin Lonsdale made this request of the European Union's newly appointed ambassador to Vanuatu, Leonidas Tezapsidis, when he presented his letters of credential last week.

Mr Tezapsidis says his office is committed to strengthening the partnership between Vanuatu and the EU and that it will do everything possible to maintain the relationship.