About 80 refugees have staged a protest in Nauru, marching on the Australian High Commission.

The organisers says the march was peaceful with people directing chants against the Australian Immigration Minister, Scott Morrison.

Dozens of young children were involved. 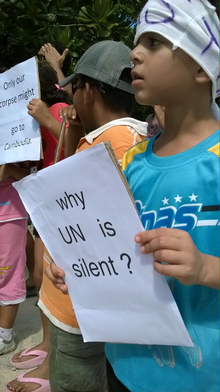 There are more than 100 refugees on Nauru with hundreds more asylum seekers still incarcerated in the Australian run detention camps on the island.

The Refugee Action Coalition reports there have been more incidents of self-harm in the detention camps, where there have also been a series of protests since last Friday.

The latest protests were prompted by Australia's plans to re-introduce temporary protection visas and the prospect of refugees being re-settled in Cambodia.