Tonga's northern islands may have to start using seawater desalination plants by the middle of this week to deal with an extreme dry season affecting the area. 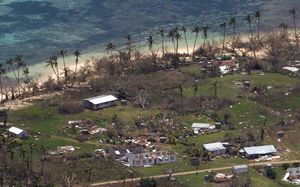 Cyclone damage in the town of Pangai in January. Photo: AFP / RNZAF

Radio Tonga has reported more than 40 percent of water tanks in Ha'apai are running out of water after a lack of rain.

The National Emergency Management Office's director, Leveni Aho, says rain in the next few weeks is unlikely, partly due to El Niño.

He says Ha'apai is the most vulnerable as many people are still living in tents following a category-five cyclone which struck the island at the beginning of the year.

Mr Aho says an officer has been sent to the northern groups to assess how much water is left and long it will last.

"Then we start to activate other stage by stage, delivering water and get to the point of mobilising desalination and other assets to try to alleviate the problems."

Leveni Aho says the community must conserve water as much as they can.