The Samoan Prime Minister, Tuilaepa Sailele Malielegaoi, has applauded change to rugby's eligibility laws but says a stand-down period of 18 months should be reduced. 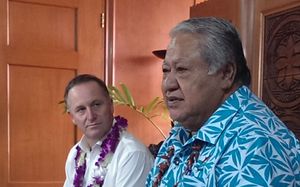 The change from the International Rugby Board means that a player can apply to switch their national allegiance if they hold a passport for a second country, have not played international rugby for at least 18 months and that they turn out for their new nation during the upcoming World Sevens Series.

Samoa is one of a number of countries to have received a number of expressions of interest from players keen to make the switch, including ex All Blacks and Wallabies players.

The move would allow players to compete for their new country at next year's Rugby World Cup and the 2016 Olympics.

Tuilaepa, who is also chair of the Samoa Rugby Union, supports the change but believes improvements can still be made.

"My preference is to put it down to six months. That will open up the sport and make it real global and then the competition becomes even. It's not good to see the game being not competitive - you don't enjoy watching".

Meanwhile Tuilaepa and Manu Samoa coach Stephen Betham will both be in attendance at a press conference in Wellington on Tuesday, where details will be announced about next year's test match against the All Blacks in Apia.