Manu Samoa have been offered a million dollar prize if they win next year's Rugby World Cup. 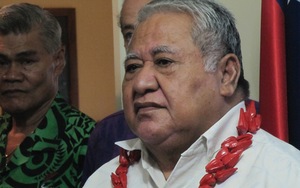 The incentive was announced by the Samoan Prime Minister, Tuilaepa Sailele Malielegaoi, in Auckland on Monday while announcing the SRU's new sponsorship deal with Australian company Cromwell and Redefine Property.

Tuilaepa hopes the initiative will make players think twice before they choose to play for other countries rather than Samoa.

He believes that winning the World Cup is not a fantasy and is achievable.

"This will be a great physical incentive for the boys. I am going to inform all the players to think about this incentive and it is not just this because there will also be local companies and government corporations who will all contribute. It is an incentive that has a most positive contribution to building up the spirit of our players".

Meanwhile, Tuilaepa will meet with New Zealand Rugby officials on Tuesday to finalise details surrounding next year's historic test match against the All Blacks.

In July the Prime Minister, who is also chair of the Samoa Rugby Union, said New Zealand officials had accepted Samoa's invitation to play in Apia.