Fiji's Labour Party leader says he won't put up evidence to the media authority that it shut down a debate as he wants to protect the media. 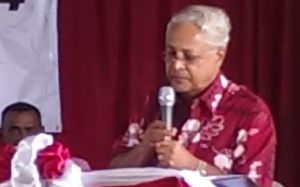 Mahendra Chaudhry says he was approached by media organisations two to three weeks ago, canvassing his interest in a broad leaders' debate with all six leaders, but it was disallowed by the Media Industry Development Authority.

The chairman of the authority, Ashwin Raj, denies the accusation and threatened legal action if Mr Chaudhry didn't produce some proof.

Mr Chaudhry says he won't say who approached him as he would expose the editors, and they will be targeted.

But he then accused the same media, as well as the newspapers, of cowardice.

"It's indeed a shame that the media here is so cowed down. I think they should show more guts and courage and stand up to the media oppression."

Mahendra Chaudhry says it's a shame there will be no broad leaders debate before the election.