Asylum Seekers at Australia's Manus Island detention centre in Papua New Guinea have signed a letter blaming the centre's healthcare provider for the situation that led to a man lying brain dead in a Brisbane hospital.

24-year-old Hamid Kehazaei was medivacced from Manus Island to Brisbane last Wednesday suffering from septicaemia caused by an infection that spread from a cut in his foot.

A decision is expected to be made soon on whether to switch off life support.

The Refugee Action Coalition's Ian Rintoul says Mr Kehazaei is a victim of shocking conditions and there are many complaints of substandard medical care on Manus.

He says the asylum seekers have signed a letter saying the healthcare provider, International Health and Medical Services, is to blame for Mr Kehazaei's situation.

"People walk in untreated sewage, the water shortages; there aren't showers, there isn't water for the toilet almost half the time, there are constant infections and skin diseases, there are scores of people coming off Manus Island for treatment in Australia." 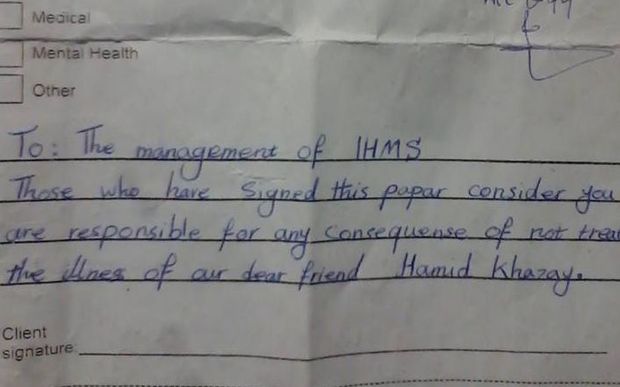