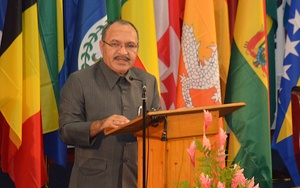 Speaking at the United Nations Small Islands Developing States Conference in Samoa, Peter O'Neill says PNG is moving away from the old mentality of allowing unrestricted growth, to one of managed economic growth.

He says that with close to 70 per cent of the Pacific's population, and a large proportion of languages and land mass, it's important that PNG tells its story to other nations.

"Papua New Guinea is going through a unique situation where we've experienced close to 13 or 14 years of growth in our economy and that growth has now translated into developing many of our sectors which have been very much neglected in the past."

Peter O'Neill says he is calling on the UN to help provide a a framework to review and assess the performance of development partners in keeping the promises they make at the SIDS conference.