A Papua New Guinea lawyer says it appears the government bent over backwards to allow asylum seekers to be transferred to PNG at the behest of the Australian government.

Loani Henao is representing, the leader of the opposition, Belden Namah, in his quest to challenge the agreement between PNG and Australia, which saw the Manus Island detention facility reopened in November 2012.

Mr Henao says the government has succumbed to pressures from a foreign government in return for big promises of funding for various projects.

"It seems that the monetary aspect of the arrangement between the two governments has taken priority over the principles of amending a constitution which really should be for the benefit of the people of this country."

Mr Henao has applied to amend Mr Namah's original legal challenge with the integrity of the constitution again at the heart of the case. 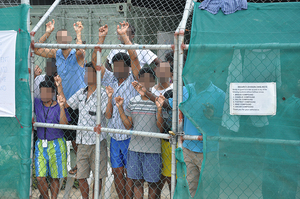 A sign on a fence orders guards to carry hooked knives used to cut the rope of people who attempt to hang themselves. Photo: AAP