Fiji's Prime Minister Frank Bainimarama has brushed off protestors who branded him a dictator during his visit to New Zealand at the weekend.

About 25 protestors chanted and yelled complaints during a rally in Auckland held to drum up support for Rear Admiral Bainirama's FijiFirst party. 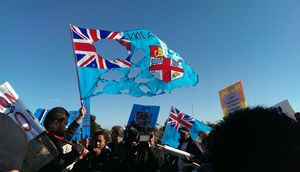 A clash has broken out in South Auckland between supporters and opponents of Fiji's leader Frank Bainimarama. Photo: RNZ

He told a talkback radio programme on Radio Tarana he had been working towards democracy for the last seven years.

"That's people's definition of leaders nowadays, dictators and presidensts and prime ministers, but what does it mean to the people of Fiji if I'm doing what needs to be done."

Frank Bainimarama says it is time for decisive leadership in Fiji and he can't afford not to win the full fifty seats on offer in the new parliament..