The Vanuatu government says it is seeking advice on compensation for the Singapore-based company which lost a deal to develop an international airport in Vanuatu.

The airport plan, introduced by the recently removed Prime Minister, Moana Carcasses, was met with strong opposition from MPs over the terms of the US$350 million contract. 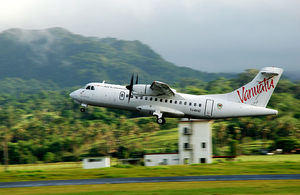 An ad hoc parliamentary committee decided the plan's risks outweighed the benefits, and the project was canned last week.

The Prime Minister, Joe Natuman, says the government is contesting that figure.

"We have asked the taskforce which was responsible for advising the government on this particular agreement that they will work with the Singaporean company and they will go through their cost, itemise every cost, decide whether or not to gather those costs."

Mr Natuman says the Vanuatu Investment Board has said the company was never registered in the country.