A memorial service has been held at sea in American Samoa in remembrance of the two victims of last week's plane crash.

The single-engine plane crashed into the ocean just minutes after taking off from Pago Pago International Airport.

The body of 17-year old Haris Suleman was recovered not long after the crash while the body of his father, 58-year old Babar Suleman is still missing.

The United States Coast Guard has suspended the search.

Among the people on board a passenger ferry for the memorial service were three members of the Suleman family along with a family friend.

Haris Suleman had hoped to set the record for the fastest circumnavigation around the world in a single-engine airplane with the youngest pilot in command.

His journey also was a fundraiser to help build schools in his father's native Pakistan. 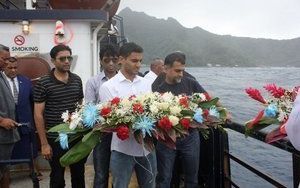 Cyrus Suleman, brother of 17-year-old pilot Haris Suleman about to toss a wreath at sea, in honor of his brother and still missing father, Babar Suleman. Photo: RNZI / Monica Miller