The Governor of Papua New Guinea's national capital has signed a deal with a company that will see betelnut sold in packaged form.

It's the next stage in Governor Powes Parkop's campaign to clean up Port Moresby's streets, following the city-wide ban on public sale and consumption of the nut last year.

Despite the ban, the trade in popular betelnut has continued, largely underground, and the price has sky-rocketed. 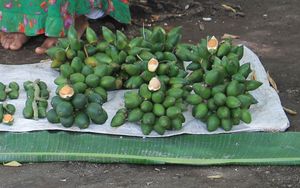 However Mr Parkop has now signed a service agreement with a company, Askopina Limited, under which it will purchase betel nuts from producers in Central and Gulf provinces and then sell to licensed vendors within the city to trade.

As part of the new packaging, the betelnut is husked and sold in an air-tight plastic bag.

2,000 cottages will be built by the National Capital District Commission to give licensed betelnut vendors trading facilities.