A People's Representative for Ha'apai in Tonga where a category-five cyclone displaced 5,000 people in January says residents do not have enough food and up to 200 families are still living in tents. 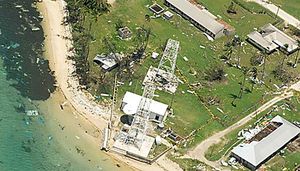 Mo'ale Finau, who is a member of the opposition Democratic Party, says he is proposing a resolution in Parliament for the remainder of the relief fund to be spent on relief now.

He says the one million dollars left in the Cyclone Ian relief fund is being reserved for a possible future cyclone.

He says not a single destroyed house has been re-built yet, and the people of Ha'apai need more food, as between 85 to 100 percent of crops were destroyed in some areas.

"The tinned fish were bad, and the rice was expired. So the people of Ha'apai generally are still not happy, you know, they are tired of living in tents, so they just don't know what to do. It's just me, because in a politician in the parliament, that I face the government."