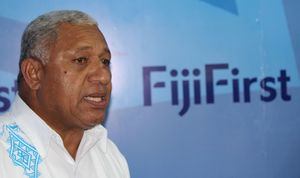 The Prime Minister has told local media he will spend four days in New Zealand next month.

But the New Zealand government will not say whether the visit will go ahead, despite Wellington lifting travel sanctions on those who carried out the 2006 military coup in March.

A spokesperson for the Coalition, Nik Naidu, says such travel is part of Fiji's move towards democracy.

He says the international community wanted Fiji to have an election, has lifted travel sanctions, and now must accept the Prime Minister will want to travel.

"You've got to stick by your own principles to oppose the military regime, but on the understanding that there will be smart sanctions applied and the sanctions will be gradually relaxed as that regime moves towards parliamentary democracy. So it's a give and take, and you've got to hedge your bets. Because if he wins legally, then what do you do if you don't let him in?"

A spokesperson for the Coalition for Democracy in Fiji, Nik Naidu.