A Melanesian Spearhead Group leader says it is hoped that the organisation can help West Papuans forge agreement on their future through dialogue with Indonesia.

The comment from Vanuatu's Prime Minister Joe Natuman comes after MSG leaders resolved to seek a more proactive approach alongside Indonesia to help address the development needs of West Papuans. 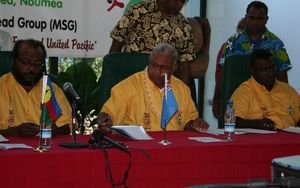 Mr Natuman says every effort should be made to facilitate West Papuan self-determination aspirations.

Yeah I think we should work together with Indonesia and continue to have dialogue. It's a process. This is what we've done with New Caledonia which has a process with France, and eventually they formed their FLNKS and managed to reach agreement with France on various agreements.

Joe Natuman says Vanuatu is still considering seeking an International Court of Justice opinion on the legality of the UN-sanctioned process under which the former Dutch New Guinea was ceded to Indonesia.