In excess of 1000 people are now reportedly staging a protest in Port Moresby in defiance of a ban by the country's police chief.

The acting police commissioner, Geoffrey Vaki, yesterday withdrew the approval for a march that had been granted by the metropolitan commander. 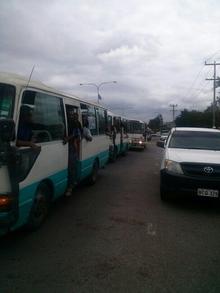 Mr Vaki said he wanted to play it safe as various groups planned a march in opposition to the country's embattled prime minister, Peter O'Neill.

Commentator and blogger Martyn Namorong says earlier police had outnumbered protestors but he says numbers in protest at Unagi Park in Port Moresby have increased exponentially.

He says they believe the prime minister should resign.

"And I get a sense here that people are not necessarily talking about a change of government but for the prime minister to step aside and to allow due process to take its course and for him to appoint an acting prime minister and, you know, let this country get on with life. The prime minister cannot hold this country to ransom, just because he wants to defend his own interests."