Australia's Refugee Action Coalition says the latest political storm in Papua New Guinea makes it even less likely that arrests will be made in relation to violent clashes at Australia's Manus Island detention centre in February.

Last week saw the prime minister Peter O'Neill sack the attorney general as well as several top policemen including the deputy commissioner, Simon Kauba, who was heavily involved in the investigation into the killing of an asylum seeker injuring of dozens of others. 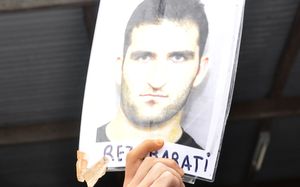 An asylum-seeker holds a picture of Reza Barati who died at the detention centre. Photo: AAP

Ian Rintoul says he has no confidence anyone will ever be charged.

"It's really degenerated into a farce and a farce which is now even more ridiculous. Papua New Guinea is rapidly turning into Nauru with no legitimate legal system, there really is a serious question over their credibility and after four months we're still no closer to anyone being held accountable for Reza Barati's murder."