A Tongan opposition MP has welcomed the budget but has warned on the growing level of national debt.

The Finance Minister, 'Aisake Eke, handed down the country's biggest ever budget, at just under $260 million US dollars, with 59 per cent of it funded by foreign donors. 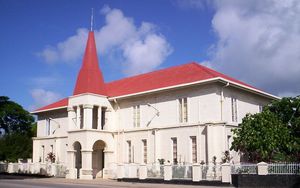 A People's Representative for Tongatapu, Dr Sitiveni Halapua, says the budget reaches out to the community following Cyclone Ian, but he is concerned about repayments, such as the 63 million US dollar loan from China to rebuild Nuku'alofa following the 2006 riots.

China has extended the repayment date for the principal amount another ten years, but Dr Halapua says the country's overall debt level at 46 per cent of the GDP is too high.

"I think we have to reduce that level below forty, even if it's thirty per cent that's in my view, more optimal and more sustainable. And that would give us more room to develop the economy."