The French Polynesian government says visa requirements for Chinese passport holders are about to be lifted for those staying less than 15 days.

It says this is in line with a plan of the French interior minister to exempt travellers from a series of countries from needing a visa.

The territory's government has spoken out in favour of the change as it comes after years of clamour in Tahiti to open up to the potentially lucrative Chinese tourism market. 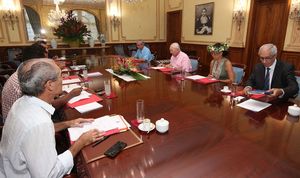 To be eligible for visa free travel to Tahiti, Chinese people will have to book their trips through travel agents approved by the French consular authorities in China.

A statement issued in Papeete says the change is expected to come into effect in June.

The French Polynesian president, Gaston Flosse, has welcomed the new policy, saying for some Chinese investors it is a pre-condition before committing to investing in French Polynesia.