EMTV reports the people saying that men dressed in police uniforms drove into their property in three unmarked vehicles on Friday, and ordered them to leave before setting five houses alight. 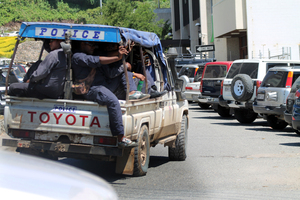 A community leader, Paul Kovei, says the policemen drove into the area behind Waigani market without warning or formal documents to evict them.

EMTV says the families are now homeless and are calling on the local MP, Daniel Mona, and the capital's governor, Powesr Parkop, to help them secure land to rebuild.