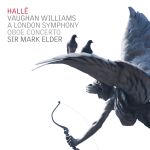 Sir Mark Elder takes a particularly forthright approach to the work, stressing its purely symphonic qualities and refusing to linger over passing details that might disturb the flow.  The coupling is Vaughan Williams’ Concerto for Oboe and Strings, a work that doesn’t get heard as often as it deserves. The soloist is the Hallé Orchestra’s principal oboe, Stéphane Rancourt, and he gives a very fine performance. 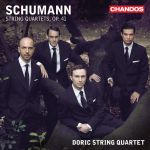 This CD brings thoroughly recommendable performances of all three of Schumann’s Quartets. This ensemble’s previous recordings for the Chandos label have been of string quartets by Korngold and Walton, and both recordings have shown them to be among the most skilled and musically gifted young string quartets of today. The clarity of the recording adds enormously to your enjoyment of this fine ensemble.

American lyric soprano Renée Fleming is renowned for the beauty of her voice, and is particularly associated with the music of Richard Strauss. Her latest recording, however, is something of a departure from her usual repertoire – French orchestral songs from the twentieth and twenty-first centuries.  If your primary reason for buying this album is Renée Fleming herself, I don’t think you’ll be disappointed by her performances of the Ravel and Messiaen works, and the Dutilleux is really quite stunning.

Gavrylyuk’s recital of Russian piano music demonstrates that he’s far more than just a virtuoso. The slower, more meditative, pieces are just as impressive in Gavrylyuk’s hands, revealing him to be a Rachmaninoff pianist of the first order. All in all, this is an exceptionally fine recital by a pianist of whom we should expect to hear great things in the years to come