"This isn't a fiery passionate performance like Busch & Kell, more like the EMI recording with the Melos and de Peyer. But this production has the advantage of modern digital technology which allows a lot of detail, usually lost, to be audible. The overall quality here is its extreme sensitivity, with the clarinet providing the same tonal palette as the strings. A first-class production which combines fire and poetry in equal measure." 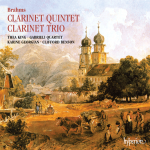 "This is one of the best engineered of my batch, thanks to the legendary Decca engineer Kenneth Wilkinson. The many doublings of clarinet and first violin blend and one can hear inside the quartet making Brahms' counterpoint crystal clear. Musically, one is struck by the complete naturalness of the performance. The music is allowed to speak for itself; it's the kind of performance that repays repeated hearing." 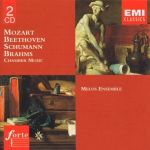 "A warm glow suffuses clarinettist Gervase de Peyer and the Melos Ensemble's recording. It's no use pretending the analogue recording sounds anything but dated but the remastering has been well managed. The Melos's tempi are deliberate but without sluggishness - it says much for this music that it blossoms under a variety of approaches." 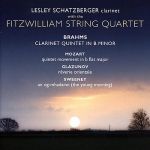 "Schatzberger went to German instrument maker Alfred Tutz to commission a copy of the instrument belonging to Brahms' clarinettist, Richard Mühlfeld. Its sound is small and sweet, and balances well with the Quartet all using gut strings. The overall sound is less boomy and more focused than that of modern instruments, and when it comes to balance they provide a model of clarity. A worthwhile acquisition." 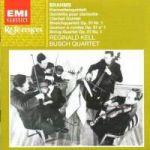 "Poetry, colour and warmth are found in abundance here. Revisiting this great performance I still find it unbelievable that the recording was completed in a single day and that Kell and the Busch Quartet had never met before. If I had to summarise its qualities into one word, it would be its humanity. Clarinet and quartet caressing and projecting each phrase yet never forgetting the overall shape and structure. This recording has been released in various guises but the EMI Références issue has the best sound."

"A constrained monochromatic affair rushed through to accommodate the short playing time of each 78 side. The clarinet is backwardly balanced but there's some fine playing from the Léner Quartet."

"Wlach has a broad, creamy Viennese sound. This recording may seem stolid and unimaginative, but after repeated hearings one sees the virtues of tempo stability and not accelerating to the big climaxes. Overall a sober affair."

"The recording is shrill and nasal, and Goodman treads carefully, anxious not to be guilty of any musical solecisms. His sound is bright and monochromatic, and he snatches at many of the crucial phrases, unable to match the subtlety of his string playing colleagues."

"Leister has a mellifluous sound never used with flair or imagination. It doesn't take long for the ear to tire of such unvarying smoothness and the lack of colour and crisp vibrant phrasing. There's none of the little freedoms and give-and-take between first violin and clarinet which bring the music to life."

"On this issue, the strings sound relatively emaciated whilst Richard Hosford's splendid clarinet overshadows his colleagues. The Nash Ensemble's performance is a lightweight one, not attempting to scale great heights or project new insights to the score."

"The recording here is closely miked and is disfigured by extremes of dynamics, especially at the soft end of the spectrum. Meyer's tone becomes raucous in the loud passages and barely audible in others. Weight and sound of rhythmic solidarity are missing here - the broad phrases are pecked at without sustaining tone."

"Frederic Thurston was Thea King's teacher and subsequently her husband, and he recorded this performance in 1941. Sadly he rejected it for release, and it's only recently that we've been able to hear it thanks to Sydney Griller, who made his set of acetates available to Testament."

"The sound is dry and coarse, and close miked to keep audience noise to a minimum. It's a pity, because the performance has the virtue of simple joy minimising the darker elements of the score."

"Sound and balance are first-class, free from unwanted enhancement. This is a refined performance. While I applaud this, as the performance proceeded I longed for a little more red blood and sense of drama where called for."