Italian septet Canzoniere Grecanico Salentino specialises in a rhythmic and often trance-like folk music associated with a frenzied folk dance which is said to cure victims of tarantula bites. While the rhythms are often feverish, their haunting songs are built around the insistent pounding of the tamburello frame drum over layers of violin, bouzouki, bagpipes and accordion. (Recorded at Brooklands Park, New Plymouth by Radio New Zealand)

Music for two to eight hands 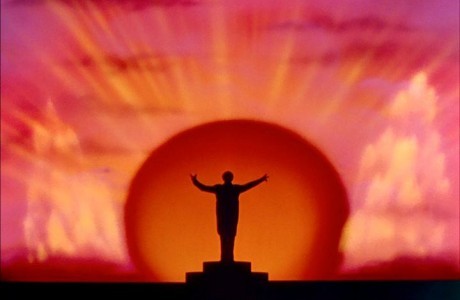 We’ve always been fascinated here at Relevant Tones with how our perceptions of music change when it’s paired with visual imagery. With that in mind we’re asking several prominent visual artists to suggest imagery to a wide variety of different pieces by living composers. Relax, close your eyes and enjoy the view! (WFMT)

Sanya Glisic
It is snowing.
As I walk, my boots squeak through the snow and I look down at them. Childhood. Heavy quiet outside.
Then, strong winds as I turn the corner. Running.
I look up at the sky, it begins to open up, a few birds fly across. The sun emerges then hides again behind the clouds.
There is stillness and melancholia, some kind of heavy gripping sadness and beauty at the same time.
As the music picks up, the image disappears and I can’t hold on to the story.. I panic a bit, then return to where I was. Perhaps I am just re-absorbed into the current of the city and the day.

Angee Lennard
The piece begins sharp with notes swinging up in a curious unsettled way, as if asking an urgent and perhaps unwelcome question. As the piece plays out, I stick with the premise of a question raised.

This question is not one that can be easily answered. The protagonist allows this question to roam, remaining pensive and inward for some time. In time, perhaps non-linear thoughts hit upon a visceral nerve, triggering a whirlwind of unfiltered reaction. Over-stimulated, the protagonist eventually loses consciousness.

The protagonist awakes a bit disoriented, but with peace and the sense of solace that comes in the wake of an emotional outpouring.

Enlightened, the protagonist is ready to reengage with the external world, and does so with enthusiasm.

Bill Bartelt
A year ago I was in the Sea of Cortez, off the east coast of Baja California.  My friend Julie and I were kayaking around a desert island, Isla Espiritu Santo.  I had never kayaked before, nor had I ever been in open sea in a small craft.  I was a bit wary.  After an afternoon of travel in a motor launch across to the island, we were dropped off with our kayak and our gear, to be virtually the only ones on the island for 5 days.  Julie and I made camp, had a siesta, and then she said, “Time for you to learn how to kayak.”  We got in the tiny kayak, and headed west into open water.  It was near sunset, and my somewhat disoriented and unsure eyes were filled with images of the afternoon, during which we had snorkeled with seals and been visited by dolphins and otters along the way.

The evening waters were becalmed.  The sky was filled with calling seabirds.  Behind us were the sheer cliffs of the island, illumined with the red light of the evening.  Ahead of us was forming one of the most breathtaking and eerie sunsets I had ever seen.  We sat still in the water and watched as the clouds shimmered with radiance, silently spreading from the western to the eastern horizon.  Shapes within the clouds began to take on the very definite forms of the aquatic life we had encountered earlier in the day.

Dolphins, fish, seals, all began to appear, as if sculpted in vapor, and slowly danced in the sky, changing from orange to scarlet to purple as the disc of the sun lowered.  The soundtrack to all of this was the calling seabirds, which are suggested to me by the energetic , frenetic and skittish strings in the music.  The deep howls and roaring of the bass elements of the orchestra suggest the fierce and primeval masses of red and orange rock that loomed behind us.  As the sky eventually began to pale, and the eerie forms in the sky began to dissipate, the birds too fell silent.  Just as the music fades to quiet, with the onset of night, so did the sky, the sea and the evening.  And we returned to the island, thinking that we might possibly have been the only humans to see this peculiar and unearthly splendor.

Linda Cohn
Urgency
it’s dark
hurrying down alleys around corners through a maze
peering over my shoulder and
no one’s there.
am I trying to catch my own tail?
Then a bright green clearing opens with light
an ole’ sweet country road
and Chagall’s floating lovers.

Lynn Basa
Exotic lands
Magic
Genies
Arabesque shapes morphing into strange flower animal forms, but not quite
Turquoises, soft oranges and greens
Layered for sure
Patterns start out but dissolve
There’s a darkness lurking
Shapes don’t cover the whole surface
They’re kind of random and lost, trying to find their way
In the corner, something foreign intrudes into the paradise
There’s a fight over territory
The Arabesque and the foreigner tangle in skirmish
But then they pull back and regard each other cautiously in the negative space
They swirl around each other, make darting motions into the negative space
Stabbing, undulating
The color changes to more oranges and reds.  It gets hotter.
The adversarial forms are becoming indistinguishable from each other in a swirl.
Fade, reappear strong and clear as a new entity.
They’ve changed the landscape through their encounter.
Now some incongruous new shapes appear as a new layer on top of the new landscape.
Up in the corner, appearing at random moments on the surface. They’re lost, too.

Victoria Martin
It is either dawn or sunset or alternating between the two… time is going forward and backwards and always portraying this transition form day to night, night to day.,, the so called ‘ Magic Hour’. Since it is that transitional time of day the forest or underwater place I am in is behaving strangely. It is a place with many beautiful, organic, brilliantly colored shapes, moving, breathing and evolving, I feel safe and in rapture, but there is an ominous sense; I feel there is a storm coming on! I am constantly hypnotized, but I am balancing fear with fascination… these beautiful organic shapes in the land, water, skyscape rotate between botanic, animal, and astronomical figures, There are flowers, sea creatures, birds, comets, lightning flashes and aurora pulsing with life. There are points in this journey when fear sets in can’t go on.. yet I am pulled along  because I am discovering something, the end  is surprised, but feel that I got what I came for.