Now one of New Zealand’s most experienced composers, Anthony Ritchie graduated from Canterbury University then went on to further composition studies at the Liszt Academy in Budapest. On his return he spent a year as Composer-in-Schools in Christchurch, before taking up the post of Mozart Fellow at Otago University for the years 1988-89.  He spent twelve years as a freelance composer, writing commissioned pieces for leading ensembles such as the New Zealand Symphony Orchestra and Footnote Dance Company, and in 2000 he became a lecturer in composition at Otago University, where he is now Associate Professor.

Oppositions was composed in 2005 for the New Zealand Piano Quartet. The composer writes: “It is in one movement, and is based around the idea of opposing forces, whether they be literal or imaginative. In musical terms, the piano is frequently pitted against the strings, while musical themes seem to jostle for supremacy. After a short and ominous introduction, the strident first theme is playedon violin, accompanied by hammered chords. A second theme has all three stringed instruments playing in ‘cluster’ harmonies. The cello announces a lyrical but turbulent idea, and this is played in counterpoint with the first theme. The piano is to the fore in a third theme, which is stealthy and marked by sudden outbursts. These themes are discussed in a middle section that gradually winds down to very soft, thudding chords, before building up to a vigorous return of the opening. In this final section themes are fragmented and tossed around violently, before a brief Coda in which the first theme appears dominant.”

Founded in 1997, the Eggner Trio came to international attention by winning First Prize in the International Brahms Competition in Pőrtschach in 1999, then First Prize in the Melbourne International Chamber Music Competition in 2003. The Trio was selected for the European Concert Hall Organisation’s ‘Rising Stars’ programme for the 2005-06 season, enabling it to perform at major concert halls around Europe and make its American debut in New York’s Carnegie Hall. They are now invited to leading chamber music events such as the Schubertiade and Lockenhaus festivals, and regularly perform at the Wigmore Hall, London and the Concertgebouw, Amsterdam.In 2013 their CD of music by Clara Schumann and Brahms was given an award by Radio Austria. Four earlier CDs include music by Shostakovich, Mendelssohn and Beethoven, as well as trios written for the group by contemporary Austrian composers. Since 2006 the Eggner Trio has made regular concert tours of Australia and New Zealand, and members of the group have established themselves as audience favourites. 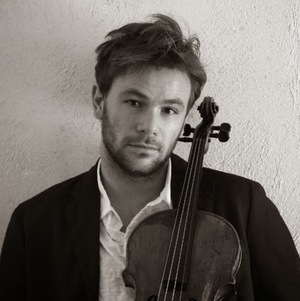 Amihai Grosz learned the violin from the age of five, and changed to the viola when he was eleven. He entered a programme for outstanding musical talents at the Jerusalem Music Center, and later studied with Tabea Zimmermann in Germany and Haim Taub in Tel Aviv. As a founding member of the Jerusalem Quartet he has toured New Zealand several times for Chamber Music New Zealand. In 2010 he left the Quartet to take up the position of Principal Violist with the Berlin Philharmonic, and now performs as a soloist and chamber musician with leading artists such as Yefim Bronfman, Mitsuko Uchida, Janine Jansen, Julian Rachlin and David Geringas.

Chamber Music NZ sat down with the Eggner Trio brothers Georg, Florian and Christoph, and their honorary '4th brother' Amihai Grosz (Principal Viola Berlin Philharmonic), to chat about their September 2014 tour around New Zealand just before it began.