DIÁLOGOS: the music of John Psathas

Radio New Zealand Concert recorded a concert by the Chris Mason-Battley Group in March 2013. Chris said during the concert that they'd taken "elements of John’s compositions, extracted them, distilled them, turned them upside down back to front; seeing where that takes us improvisationally...”

This free podcast is from that concert:
IMPROV ONE - Source Music: PSATHAS: Songs for Simon for Piano and Tape (Three movements: His Second Time, Minos, Demonic Thesis)

The Chris Mason-Battley group is one of our premiere contemporary jazz ensembles, who’ve had success at home and overseas since their formation in 1999. Pat Metheny, John Schofield, Keith Jarrett and Jan Garbarek are all influences of the CMB Group.

They have an improvisational and collaborative approach to composition – in this case using the works of New Zealand composer John Psathas. This concert Diálogos (Greek for Dialogues) was recorded at the Auckland Fringe Festival in March 2013. It features seven improvisations based on Psathas’ works, from his 2012 film score to Good for Nothing to his fiendishly difficult Drum Dances. 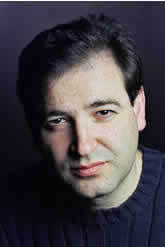 John Psathas is a composer and Professor of composition at Te Kōkī New Zealand School of Music. His music has achieved a level of international success unprecedented in New Zealand history, and his concert works are performed regularly on the international stage by some of the world’s top musicians. These include Dame Evelyn Glennie, Joanna MacGregor, The Halle Orchestra, Michael Brecker, Joshua Redman, Kristjan Jarvi, Sir Mark Elder, Pedro Carneiro, and many others.

Originally of Greek heritage, John is also now widely considered one of the three most important living composers of the Greek Diaspora. He has a natural inclination toward mega-projects. Since writing much of the ceremonial music for the 2004 Athens Olympic Games, John’s music has been on the radar of a wider public than that normally associated with contemporary classical music.

John is in extremely high demand as a composer in many genres and media. His musical style brings together the languages of jazz, classical, Eastern European and Middle Eastern, avant-garde, rock, and electronica.