The Scottish balladry of Alasdair Roberts

William Dart listens to the recordings of Scottish folksinger Alasdair Roberts in anticipation of his new album, The Fiery Margin, due out soon. 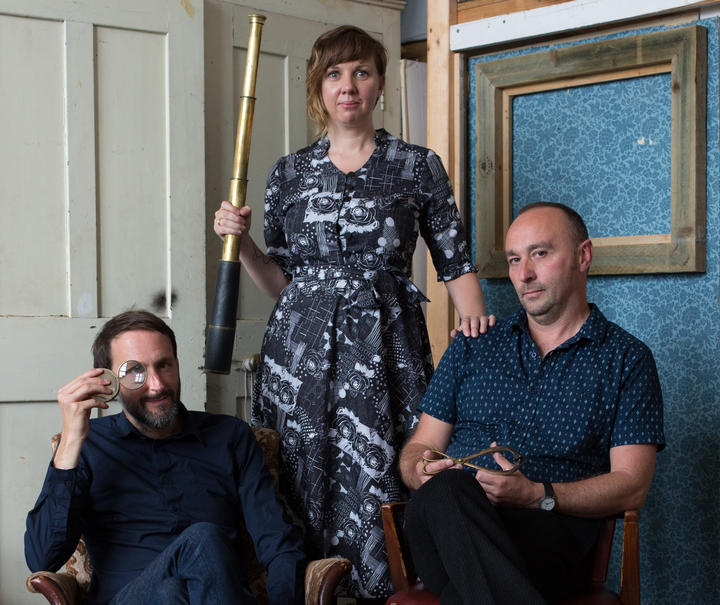 Two years ago, Scottish singer Alasdair Roberts made one of the most moving contributions to an album that paid tribute to the English folksinger Shirley Collins.

It haunted me at the time, and not only for the way in which Roberts obviously felt that this lovely song, 'A Blacksmith Courted Me', need not necessarily be the province of women singers only. I was also extremely taken with David McGuinness’s piano, catching, as it does, the spirit of what Shirley’s keyboard playing sister Dolly added to their songs in the 60 and 70s.

Over the last few years I’ve been pursuing Alasdair Roberts and his music. Which meant going back to the Scotsman’s teenage years in the 90s, when he put down his music under the moniker, Appendix Out.

After a dalliance with the Secretly Canadian label, he secured a recording contract with Drag City, alongside the American singer Will Oldham, the man responsible for making the necessary introductions in the first place.

For the esoterically inclined, a 1999 release by Roberts may well be manna for the soul. Titled Lieder für Kaspar Hauser ('Songs for Kaspar Hauser'), it not only evokes the 1974 movie by Werner Herzog but also reminds us that this singer was born in Swabia, to a German mother.

The B side, titled 'An den Nachthimmel Gewohnt' ('Accustomed to the Night Sky'), is a fragile piece of musical trancing. Little wonder that one writer likened it to the act of “swimming in the galaxies”.

By 2001, using his own name, Roberts gave us his first solo album, a collection of traditional ballads, sung to his own guitar.

But the leap from this to his 2003 outing, Farewell Sorrow, was a mighty one. Here he writes his own songs, but one can still sense all of its dozen tracks being drawn out of the Scottish balladry that is so much part of him.

Despite a few jaunty titles like 'Join our Lusty Chorus' and 'Carousing', the album is imbued with the gentle melancholy of its title song.

The rich heritage of Scottish folk music has had a tremendous impact on Alasdair Roberts as a songwriter and musician. It’s an area in which he’s become an indispensable scholar. Eight years ago, he was commissioned by the Alan Lomax Foundation to compress 25 hours of the American’s 1950s Scottish field recordings into one, 17-track album titled Whaur the Pig gaed on the spree.

Decisions must have been daunting but Roberts shows admirably catholic taste. He acknowledges the toe-tapping accordion-led dance music of Jimmie Shand, some of whose 78rpm recordings sat by my family’s old wind-up gramphone.

The irrepressible Shand gives us a medley of three rather jolly reels, including the splendidly titled 'The Wife She Brewed It'.

At the other end of the spectrum, Roberts chose the very dramatic Mary Cosgrove, who puts full heart and voice into telling the tale of 'The Collier Lad', wooed from the mine to the army by a fast-talking soldier, with the lubrication of copious jugs of brown ale.

The same year, 2011, saw Alasdair Roberts teaming up with an unexpected musical partner.

Concerto Caledonia is a livewire Scottish ensemble that mixes together the classical and the traditional. Here, in one of a number of recordings in which they present forgotten Scottish masters, they play a quartet by Thomas Erskine, the 6th Earl of Kellie, a man born a decade before Mozart and who also left this world much earlier than he should have, thanks to a somewhat over-indulgent lifestyle, especially in the alcohol department.

Perhaps this music could be the missing link between Vivaldi and Fairport Convention.

2011 saw Concerto Caledonia working with Alasdair Roberts on an album titled Revenge of the Folksingers. Also on the bill was Olivia Chaney, who’s already been on this programme a few times, one of them singing folk songs with Kronos Quartet.

Revenge of the Folksingers has lots of fun with the well-known Benjamin Britten folksong arrangements. And somehow, those celebrated chords from O Waly Waly seep into a delightful cover of 'OK, I'll Count to Eight', a song by the Scottish eccentric Ivor Cutler.

Alasdair Roberts fans and followers will be eagerly anticipating his new album, The Fiery Margin, due out in in mid-September. It’s a modest collection of ten songs with interest-tweaking titles such as 'False Flesh', 'Europe' and 'The Untrue Womb'.

'The Untrue Womb' was previewed eight years ago, sung by Roberts and Rod Jones of the band Idlewild as part of CD venture by The Fruit Tree Foundation. This is a Scottish project using art as a means of raising awareness of mental health and challenging our perceptions of it.

There are moments when this earlier version sounds a little rough around the edges but maybe, like me, your ear will be satisfied by the rather clever way in which Robert builds up the song over the one descending scale. And when the instrumental break gets cooking, it’s almost like being in a Richard Thompson jam session.

So, until The Fiery Margin comes along, we have to content ourselves with a recent album titled Au Cube, made up of a series of live performances by Roberts, the French a cappella trio Tartine de Clous, and Scottish fiddler Neil McDermott.

The title is explained by most of the music being captured at the end of 2017 when the musicians were in residence at Bristol’s Cube Cinema.

The song 'I Fell in Love' will be familiar to some, taken off Roberts’ very first solo album, and it projects its own atmosphere of lull. Indeed, it would be even more lulling if the three monsieurs of Tartine de Clous were a little more homogenous in the matter of intonation. The price to pay I suspect for a live and probably pretty informal performance.

A far more important release by Alasdair Roberts last year was another venture with friends – in this case pianist David McGuinness (who just happens to be the keyboard man with Concerto Caledonia) and Amble Skuse, who describes herself as a "sonorist", layering sounds from her laptop onto the two men’s performance.

She sets the atmosphere for the very first track, 'The Dun Broon Bride'

Deeply informed by traditional folksong, the eight tracks of the album What News are songs from the bleak side of the street.

Some though are less bleak than others, one being 'Rosie Anderson'. There’s some historical provenance here, and it’s been been covered by the likes of June Tabor and Martin Simpson. In fact, when Roberts learnt it from the singing of the Englishman Dave Burland, he didn’t realise that it was, in fact, Scottish.

David McGuinness sets the mood here, playing a dulcitone, an instrument invented by the Glaswegian Thomas Machell in the 1880 in which a keyboard activates a rank of chiming tuning forks. Perfect, McGuinness says, for a tale of the undercurrents of 19th century gentility.

Amble Skuse’s electronic ripples are somewhat discreet there, but there’s a little more turbulence to ruffle the serenity in the song  'Babylon', known to some as 'The Bonnie Banks of Fordie', a grim murder ballad.

It’s been sung by both Scotsman Dick Gaughan and Englishman Nic Jones, but Alasdair Roberts insisted on learning it from a Scotsman, the late and distinguished Stanley Robertson, nephew of Jeannie Robertson who supplied Alan Lomax with so many wonderful songs.

Skuse’s laptop dispenses all manner of sonic spookery as the tale unfolds, inspired by driving down a dark wiggly road, with trees on either side.

David McGuinness provides the spine of the song at his keyboard, carefully drawing what he does out of the actual melody line.  Choosing neither dulcitone nor the 1840s Broadwood grand piano that features on a number of tracks, he settles on a Paul McNulty fortepiano, giving it a lively excursion from the powdered wig world of Haydn and Mozart.

'The Wife She Brewed it' (Trad) – Jimmy Shand, Sidney Chalmers
Whaur the Pig Gaed On the Spree
(Drag City)