Beethoven lived in the noisy and polluted early industrial era. To escape the rabble those with means would pay for a few quiet hours at a spa. Beethoven’s solution was to escape to the countryside around the city for long hikes. 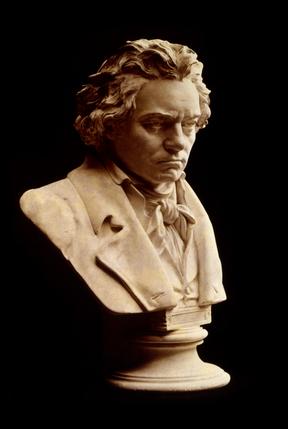 “No one can love the country as much as I do,” he said “For surely woods, trees, and rocks produce the echo which man desires to hear.”

Beethoven also enjoyed rustic music. Amateur bands playing Austrian folk dances brought him a lot of joy, even when their playing was less than accomplished.

On one countryside ramble with fellow composer Ferdinand Ries they saw a shepherd playing a pipe in the distance. Beethoven saw from his friend’s face that the music was beautiful, but he couldn’t hear it. It was said that Beethoven was never the same after that.

By the age of 44, Beethoven was almost totally deaf and unable to hear voices or the characteristic sounds of the countryside.

In his 'Pastoral Symphony' he wanted to do more than assemble a collection of natural sounds, he wanted to capture the inspiring feeling of being in nature.

He sets a relaxed pace in the opening movement. Rather than race to a big finale, this music gently meanders and wanders.

The Second Movement features more musical painting with a babbling brook and bird calls –  the nightingale represented by the flute, the quail is the oboe and the cuckoo by the clarinets.

Beethoven’s beloved folk bands make an appearance in the Third Movement. The composer wryly observed how village musicians often fell asleep during their performances and would wake with a start only to get in a few vigorous blows before nodding off again.

Beethoven includes this humorous scene after the horn calls and the hijinks continues until the mood darkens and storm clouds gather.

The Fourth, 'storm' movement starts with pizzicato droplets and builds to some of the most violent of all musical thunderstorms. There are thundering timpani, string tremolos and strident dissonances and lightning strike from the piccolo. The tempest subsides and the final movement follows without a pause.

The Finale – the Shepherd’s hymn, returns us to the gentle, relaxed atmosphere of the First Movement. And the movement ends with a quintessential pastoral touch – horn yodelling accompanied by a wind drone.