In this work, Golijov quotes and celebrates the work of two great composers of the tango, Carlos Gardel and Astor Piazzolla, the man who described his take on tango as “tango + tragedy + comedy + whorehouse”. 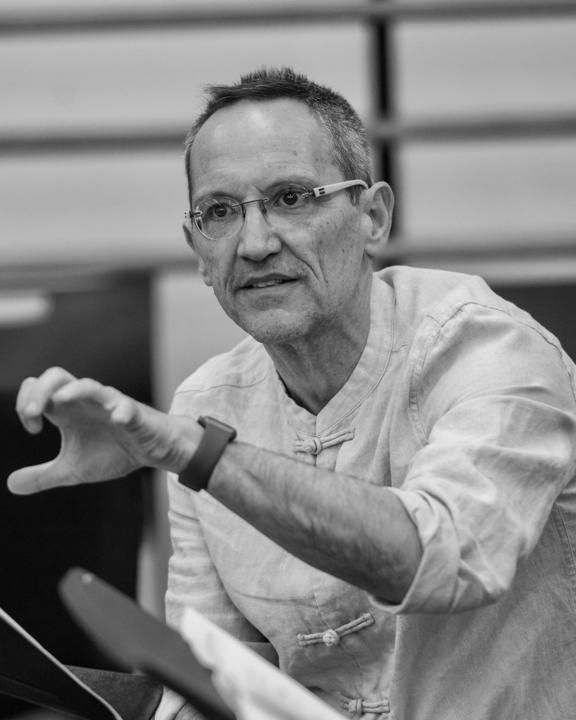 Osvaldo Golijov, born in 1960 in La Plata, Argentina, to Romanian Jewish parents, grew up surrounded by the tango, especially as espoused by Piazzolla. Notably Piazzolla’s primary instrument was the bandoneon, a 19th-century German accordion brought to South America via European immigration and, writes Golijov, “finding its true home in the bordellos of Buenos Aires’ slums in the 1920s […] Since then it reigned as the essential instrument for any tango ensemble.”

‘Last Round’ was written as a loving tribute to Piazzolla, who died of a sudden stroke in 1992, four years before this piece was written. Named after a short story about boxing by Julio Cortazar, ‘Last Round’ gives the sometimes pugilistic Piazzolla a chance to fight another day, in music. The piece pays tribute in several ways. By splitting the orchestra into two opposing bands, the composer stipulates the two bands face each other, violins and violas standing “as in the traditional tango orchestras”, with double basses placed in the middle.

A combative spirit is represented visually by the layout of the strings. Golijov also writes that the piece represents “an idealised bandoneon”.

The first movement represents the act of a violent compression of the instrument and the second a final, seemingly endless opening sigh. The first movement’s pulsing bass provides a steady tango rhythm while the two string bands battle more and more wildly. Listen for the short crescendos, clustered chords and portamenti (slides) that together sound like chords being squeezed wheezingly out of a bandoneon.

In the second movement, the Dionysian frenzy is removed, replaced by a solo keening violin which moves into a warm, slow-flowing river of sound. The flavour of tango is most evident when Golijov yearningly quotes the refrain from Carlos Gardel’s song 'My Beloved Buenos Aires'. The movement then frays away, the river of warm sound flowing peacefully out into an aural ocean.