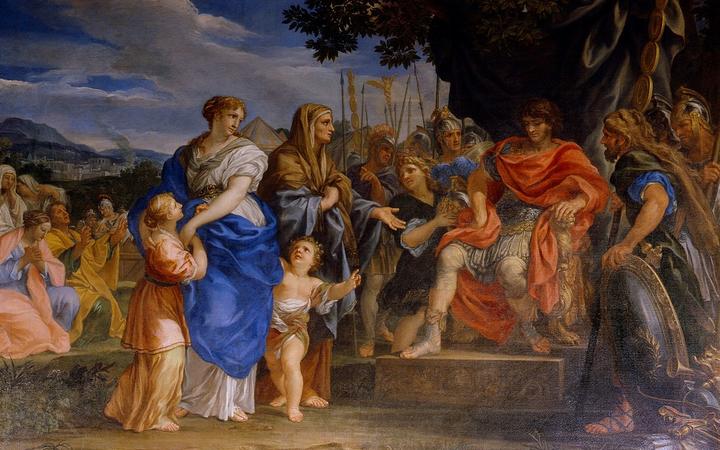 Coriolanus at the gates of Rome by Ciro Ferri Photo: Public Domain

The Coriolan Overture, written and premiered in 1807 is inspired by Beethoven's friend Heinrich von Collin's tragic (and apparently fairly forgettable) play Coriolan. Collin drew the bones of his plot from Plutarch’s biographical account of the Roman general Coriolanus (best known thanks to Shakespeare’s own dramatization of the same story).
Coriolanus is a brilliant military leader, but overly proud, and scornful of the Romans, the people he is supposed to protect from the marauding Volscians. Frustrated with the Romans, Coriolanus allows his bitterness to turn him ruthlessly against them, and he teams up with the Volscians to sack Rome and kill those he had pledged to fight for. But his mother, Volumnia, pleads with him to show the Romans, and herself, mercy. In the Collin play, Volumnia’s pleading pays off; Coriolanus realises his folly, and, presumably ashamed, falls upon his own sword in an ignominious, unheroic death.

The uncompromising brutality of Coriolanus’s actions in turning against his own people went against Beethoven’s own philosophies. Great genius should be used for the good of the people, not against the people. As such, the Coriolan Overture does not end in a life-affirming climax of heroic glory, as in Beethoven’s Third Symphony or in his Egmont Overture. No glorification of Coriolanus exists here. Instead the Overture fades away. The conflict and tension between the two themes – between ruthless brilliance and humane empathy – dissolves away into an ominous darkness.