Mahler's first version of a work that would become the first movement of his Symphony No 2, 'The Resurrection'. 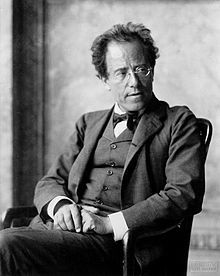 The title, Totenfeier, translates to something like 'Funeral Rites', 'Commemoration of the Dead', or 'Remembrance Service', and indeed this is a massive funeral march.

If you’re familiar with Mahler 2 you’ll recognise it instantly, although you may also spot several differences, especially in the orchestration, which Mahler revised significantly.

The composer wrote a typically bleak note of commentary on this tone poem, as he called it, “...it is the great question: ‘What did you live for? What did you suffer for? Is it all just a huge, terrifying joke?’ We have to solve these questions in some way or other if we are to go on living － even if we are just to go on dying!”

It is a work, quite simply, about the meaning of life ... which is to say, Mahler imagined that music could ask such questions, and this is easy for a 21st century audience to forget.  The composer wants every gesture is to be read and heard this way...Grave seriousness is composed into the very fabric of the piece ....  It is written to sound exaggerated, expansive, perhaps even self-indulgent, but deeply, searchingly sincere.  We’ve all heard a lot of music like this -- in concert halls, movies, on the radio; [but] Mahler’s audience had not.