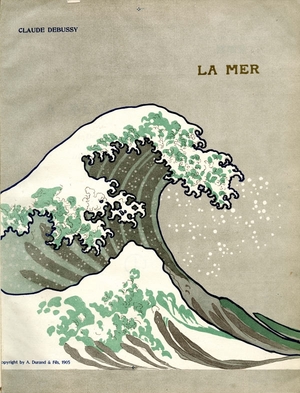 Cover of the 1905 edition of Debussy's La Mer. The illustration is based on Hokusai's Wave. Photo: Public domain

A seaside getaway at its most sonorous.

In La mer (The sea) the drama of the sea reflects the trauma of Debussy’s private life – in 1905 he fled across the English Channel to the coastal town of Eastbourne with his mistress in the wake of his wife’s suicide attempt. While such a preface may itself seem melodramatic, the moods and moments in these ‘three symphonic sketches’ suggest Debussy explores both natural and emotional depths.

The critical dialogue following the première of La mer is largely responsible for the ongoing attribution of the term 'impressionism' to Debussy’s music.  He protested to his publisher that the term described the opposite of the ‘realities’  he aspired to create.

Despite Debussy’s irritation over defining impressionism, he successfully constructed – as he phrased it – 'something different' in no small part due to his use of the whole tone scale.

By looking beyond mainstream western traditions to expand his musical vocabulary, Debussy began to explore compositional processes that avoided convention.