About These Hopeful Machines

James Gardner traces a personal path through the evolving world of electronic music – and meets some of the people who made it happen. In six content-rich episodes he looks at over 100 years of recording techniques, electronic instruments and gizmos, and their use in popular music, art music and their position in Western culture.

We also hear from several other pioneers along the way including Bebe Barron, Tristram Cary, Robert Moog and Miller Puckette.

Many audio examples have been very kindly given to us for use in these programmes and some are being heard for the first time publicly. 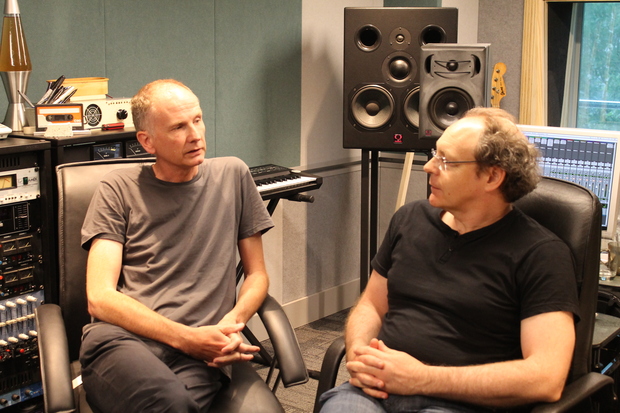 Tim Dodd and James Gardner - the core of the These Hopeful Machines production team.

James Gardner is a freelance composer, broadcaster, performer and lecturer based in Auckland.

Gardner co-founded the group/remix team Apollo 440 in London in 1990.

Following encouragement from English composer and pianist Michael Finnissy, Gardner left Apollo 440 in 1993 in order to concentrate on composition and in the same year attended Brian Ferneyhough's classes at the Viitasaari Summer Academy in Finland.

In 1996, after moving to New Zealand, he established the ensemble 175 East, which he directed until 2010. During this time the group gained an international reputation, commissioned many new works and gave numerous acclaimed world premiere performances.

James was the recipient of the 2003 CANZ Trust Fund Award, awarded annually for compositional achievement by the Composers' Association of New Zealand.

He was the inaugural Creative New Zealand/Victoria University composer-in-residence from 2004-2005 and was holder of the Trans-Tasman Composer Exchange residency in 2005/2006, during which he worked with the new music ensemble ELISION.

In 2001 James made a series of five hour-long programmes on Frank Zappa for Radio NZ Concert. He has since made many substantial features for the station on a variety of contemporary composers including John Cage, Morton Feldman and Iannis Xenakis, as well as features on The Moog synthesizer and the James Bond soundtracks of John Barry.

More recently, James contributed a chapter on Frank Zappa’s use of tape editing to the Ashgate book ‘Frank Zappa and the And’.

All images on this page courtesy of the James Gardner collection.

About the series title and programme titles

Is the title of the 2010 double album by the American musician, producer and songwriter Brian Transeau, better known by his stage name BT.

Unfortunately we couldn’t find a space for any of BT’s music in the series, but the album’s title seemed to summarize perfectly the common theme of all six episodes.

Everything Audible in the World Becomes Material

Is a phrase attributed to the German film-maker and sound-editor Walter Ruttmann, apparently from a manifesto of 1929, describing the new potential in using recorded sounds as compositional material.

Raindrops In The Sun

Is Karlheinz Stockhausen’s description (as translated by Richard Toop) of the sounds he was making for his first electronic piece 'Studie I'.

The phrase is found in a letter from Stockhausen to his friend, the Belgian composer Karel Goeyvaerts, written on July 20 1953 and appears in Richard Toop’s article ‘Stockhausen and the Sine-Wave: The Story of an Ambiguous Relationship’, published in The Musical Quarterly, Vol. 65 No.3 (Jul 1979). pp. 379–391.

Is Brian Hodgson’s description of what the BBC Radiophonic Workshop survived on.

“A ‘fag end’ was the leftover from other people’s schemes. If they had a couple of thousand pounds left over they gave it to the Workshop. And ‘lollipops’ were...if Desmond [Briscoe] whinged loudly enough, every couple of years they’d give him something to shut him up. So the ‘lollipops’ tended to be rather big things like mixing desks, which were always far too big and not really suitable for what we wanted, and far too expensive.”

I Was Born To Synthesize

Is the title of a song on Todd Rundgren’s 1975 album Initiation. A small excerpt of this track appears near the beginning of Episode 4.

Load Your Program. I Am Yourself

Is a line spoken by the ‘Bridge Computer’, 2’22” into the song ‘Karn Evil 9, Third Impression’ from Emerson, Lake and Palmer’s 1973 album Brain Salad Surgery.

A Dance To The Music of Time

The title was subsequently used for Anthony Powell’s twelve-volume cycle of novels, published between 1951 and 1975.

Songwriter Pete Bellotte had read Powell’s novels just before he and producer Giorgio Moroder started work on a new Donna Summer album in 1977.

Inspired by Powell’s work, Bellotte wanted the album to be called A Dance To The Music Of Time, and to follow the course of popular music up through the present day and into the future. The ‘future’ was represented by the song ‘I Feel Love’ (which closes Episode 4), and the past by the ‘50s pastiche ‘I Remember Yesterday’, which – to Bellotte’s chagrin – eventually became the album’s title track.

Recent stories from These Hopeful Machines