Henry Marsh: Do No Harm 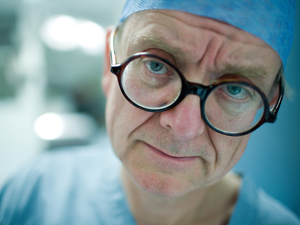 Neurosurgery “has met its Boswell”, Ian McEwan said of Henry Marsh and his bestselling Do No Harm: Stories of Life, Death, and Brain Surgery. The memoir featured on many writers’ “books of the year” list and its admirers range from Bill Bryson to Karl Ove Knausgaard.

Marsh is a pioneer of operating on brain tumours under local anaesthetic. In Do No Harm, he opens up about the fierce joy of operating, his hatred of hospitals, and the profoundly moving triumphs and sometimes tragic consequences of operating on the human brain.

He has a roguish reputation for being outspoken. His preferred attire for cycling is a cowboy hat and boots. His leisure pursuits include carpentry and beekeeping and his surgery is the subject of two major BBC documentaries, including The English Surgeon (2009), about his decades of work in the former Soviet Union.