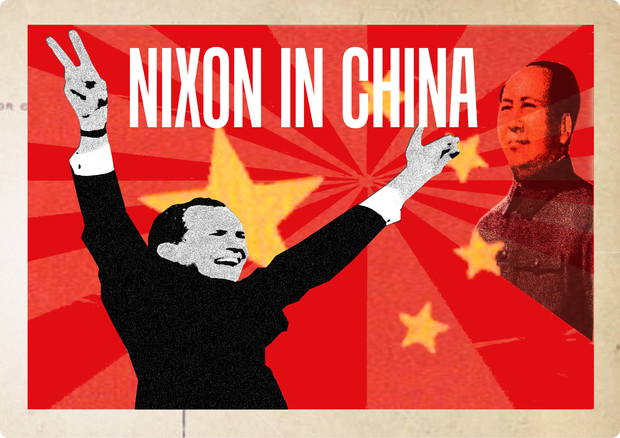 Nixon in China is a difficult work to experience, and to discuss: it is impressive, seductive, powerful, but also complex, problematic, even flawed. This production in its conviction and polish highlights many of the good qualities, but it is equally important to consider the opera not only as entertainment but as an artistic statement with its own political and social context.

Alice Goodman’s libretto is both rich with historical and cultural detail, and full of irony and whimsy. It deftly frames two diametrically opposed worlds – communist and capitalist, allegorical and literal – analysing and skewering, but also mostly talking past, each other. Pat Nixon, delighted with the present she has received, a glass elephant (symbol of Nixon’s own Republican party), asks breathlessly “is it one of a kind?” The reply is that “it has been carefully designed by workers at this factory; they can make hundreds every day,” and Pat is even more delighted. Even within these two worlds, the words are lean and light on their feet: Richard Nixon complains that “all I say is misconstrued” immediately before reminding Pat that her lipstick is crooked.

The music doesn’t always live up to the cut and thrust of the libretto: stylistically it’s a music of perpetual motion, and it often struggles to create enough space and shape for the words to find their greatest impact. However, the music has huge power on its own, enough to suggest the visceral landing of a jumbo jet, or the clipped precision of a military exercise. And when Adams puts pedal to the metal, he finds delight in Goodman’s rhythms, whether it’s “primetime in the USA” or “Washington’s birthday”. But for me the music matches the elliptical, quietly subversive text best in the third act of the opera. Here Adams allows the vocal lines to drift and intermingle; ambiguities (finally!) creep into the harmony; the texture is pared back to its most exposed and fragile, as solo violin and viola trade ascending threads of gossamer.

It’s still unclear to me whether this opera speaks to and critiques the military pomp, violent political oratory and grand public spectacle that it contains, or merely enacts and participates in them. As the mob of uniformed extras marched through the audience to take their positions it was difficult to escape the unnerving feeling that we were ourselves part of a captive, pacified crowd. The virtuosity of Madame Mao’s aria encouraged us to be thrilled by doctrine; Nixon’s exhortation to “make peace for once” was musically treated without irony or suspicion.

It seems to me that grand opera in its scale and resources is uniquely placed to offer an alternative model to the collective idol worship of say an evangelical mega-church, a commercial rock concert, a frenzied political rally. And I’m not sure that this opera does offer that alternative: the power is still vested in tyrants, albeit fictional, humanised versions of tyrants, and the only voice of dissent is the touchingly naïve Pat Nixon (played here with great sensitivity by soprano Madeleine Pierard), trying to stop a fictional peasant girl being whipped to death by a fictional doppelganger of Henry Kissinger.

But these are issues of the abstract work, which the production can do little to subvert; putting that aside, Sara Brodie’s direction here was innovative and precise, making excellent use of the Auckland Town Hall’s various nooks and crannies, and creating the impression of grandeur and activity with limited resources and space. The singers were without exception polished, convincing and full of character: Hye Jung Lee’s Chiang Ch’ing was a barnstorming standout with her penetrating aria “I am the Wife of Mao Tse-Tung”, rescuing an otherwise confusing second act; Barry Ryan caught all the physical and vocal subtleties of Richard Nixon, switching effortlessly between a clear, authoritative public voice and the unsettled interior voice of paranoia and doubt: when “the rats [began] to chew the sheets”, Ryan modulated his voice to a tense grumble. Simon O’Neill too displayed a commanding grasp of Chairman Mao’s public and private voices with a particularly memorable turn in the third act, bellowing “I AM NO ONE” before an almost tender exchange with Chiang Ch’ing (“give me your hand, old man”).

Unfortunately, with the exception of Ryan and the well-drilled people’s chorus, the singers were largely unintelligible in the first act, struggling despite and perhaps because of their microphones to project and enunciate over thick and busy orchestral textures. The words became clearer as the production went on but surtitles would have been extremely helpful, especially for the more complex ensemble scenes, heavy with Mao’s often cryptic political aphorisms. For me this issue of audibility and intelligibility, and the rather distracting, didactic video running throughout the work, were the only major problems with a generally excellent production.

Aside from some early co-ordination wobbles between brass and percussion on opposite sides of the stage, the Auckland Philharmonia Orchestra was vigorous and exacting, brilliantly manipulated by maestro Joseph Mechavich. This is music that demands enormous concentration and physical intensity, and the players were impressively committed, with some particularly tight work by the percussion section.

Ultimately this opera leaves its own questions open: Chou En Lai asks “how much of what we did was good?” It is seriously good that NZOpera and Auckland Arts Festival have given us a meaty, thrilling account of a substantial artwork, and given us the opportunity to cut our teeth on the opera (almost) of our time. But I also think it’s important to recognise that neither the artwork itself nor the choice to programme it is politically neutral. It’s the music of capitalism; it reinforces, seduces, drives forward. Are we satisfied with that? Like Chou En Lai, it is left to us to pose the question.