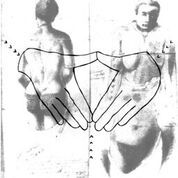 If you weren’t told this five-artist exhibition is a creative research project inspired by the ancient, lost art of Fijian female tattoo, you’d be hard pressed to work it out. While there are tattoo clues – a needling tool there, an embossed sculpture there – they are hidden in plain view among other artefacts. Given the absence of interpretive A4 sheets, asking the gallery assistant about the artworks is highly recommended.

Perhaps the obliqueness and opacity is due to the sensitive, sacred nature of veiqia: up until the early years of the 20th century, girls would undergo veiqia after reaching puberty; they would be adorned around their loins and (sometimes) around their mouths. The tattooists (dauveiqia), all women, were deeply revered.

The exhibition website mentions some of this, but you won’t find the information at the exhibition itself. After all, this is art, not anthropology. The exhibition offers artist responses to the tattooing, but also responses to its loss, and to other discoveries made in museums. Dulcie Stewart’s O kemuni mai vei? | Where are you from? displays wooden-framed family photographs in a customary home-wall cluster. But some of these cosily-arranged images– which are indeed likely to be of Stewart’s relatives – were only found by the artist in impersonal, official archives. The photographs include women who are probably tattooed, even though their markings are not on display.

Other artworks include an intriguing reaction-doco by Donita Hulme, a lifesize dance projection by Luisa Tora, a magnificent masi (tapa) by revered senior artist Joana Monolagi, and a collaborative ceramic installation by Margaret Aull of small body parts arranged together to create a megasize traditional tattooing motif, perhaps reminding us that cultural knowledge and social patterns are collectively shaped and maintained.

The exhibition suggests and discusses ways of reclaiming and reinterpreting genealogy and traditions, particularly those of indigenous feminism, in spite of knowledge loss and possible embarrassment. Curated by Tarisi Vunidilo (Secretary-General of the Pacific Islands Museums Association) and Ema Tavola, it seems to suggest ideas about how, in the face of colonisation’s disruption of history, the artists (and others) can discover and draw on their cultural past in ways that make sense to them today; how they can be contemporary and Fijian and woman and whatever-else-they-want-to-be, all at once. Veiqia, on this reading, is only one example of many possible foci. Inspiring indeed.