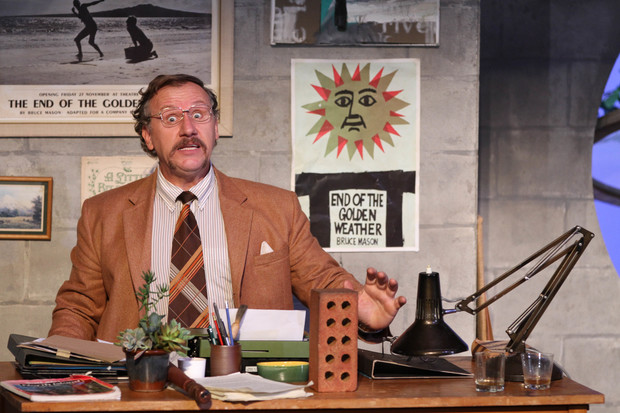 This is a “Yadda yadda yadda” kind of play.

Sitting under its deluge of words last night I also kept thinking of Bart Simpson when Mrs Krabappel is scolding him – all he hears is a yammering, meaningless sound floating above him. There’s nothing to do but sit and wait until it finishes.

The conceit? We’re in the past – possibly the 1970s – the playwright Bruce Mason has gone missing, and three unlikely figures gather in his study to solve the mystery.

It’s not an unpromising beginning. You think of earlier drama that plays tricks with theatrical form – Tom Stoppard’s Rosencrantz and Guildenstern are Dead, Pirandello’s Six Characters in search of an Author, and even the creaky old An Inspector Calls by JB Priestley.

However, in “deconstructing” the work of the playwright Bruce Mason, this script by Carl Bland comprehensively fails to invest any of its characters with emotional depth. This is a fatal flaw given that the play is intended to be about grief.

The problem here is not the fantasy sequences, puppetry and staging tricks which place the play in a universe of freewheeling absurdism. Carl Bland, Andrew Grainger and George Henare throw themselves at the task, but there is not one moment of emotional truth or profundity they can transmit in their cascade of words and flurry of action.

The final speech is a sermon which becomes progressively unhinged because of the grief consuming its character, and we’re obviously meant to feel the pain of the speaker. Not me, though. By then, I had long lost interest in the play, wearied of its supposed charms, and was longing for it to be over.

Despite a committed cast, the production has none of the life or energy of Head and 360 – two dazzling nights at the theatre which have been produced by the same company in the past.

Given the significance of Bruce Mason to the plot, the emotionally tone-deaf nature of the production is exemplified by the meaningless Maori showband numbers which intersperse the play’s scenes, even if they do clunkily echo the theme of loss and memory.

Other audio, though, did work, but not to the advantage of the production. The playing of chunks of Mason’s famous audio recording of his one-man show End of the Golden Weather was a reminder of how theatre can move, entrance, and delight. Unfortunately, it kept reminding me of how Te Pō wasn’t doing any of those things for me.

Some of the opening night audience were clearly enraptured by what they had seen. Not me, though. Not me.