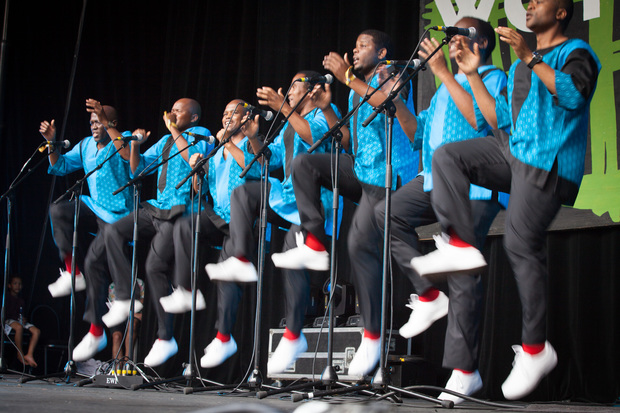 Without doubt, one of the highest profile visiting acts performing on the Bowl stage at WOMAD 2016 was the nine piece choral group Ladysmith Black Mambazo, hailing from the township of Ladysmith, northwest of Durban in South Africa.

The choir was founded in 1960 and quickly earned a formidable reputation, winning so many choral competitions they were eventually asked to stop competing, but were welcome to attend and entertain at them.

During the years of apartheid it was frequently difficult for touring black South Africans to travel. They had to have written permission to play in other cities. Frequently the choir would be stopped and have to not only produce the appropriate paperwork but also sing for the police as well, and every time they could continue their journey. At one particular road block near their town of Ladysmith, the Commissioner was there and after singing for him he said “This is too good to be stopped” and he arranged for the Magistrate in Ladysmith to grant the choir permanent permission to travel freely. Music won the day!

Ladysmith Black Mambazo recorded albums for the Gallo Record label and had the first Gold album recorded by black musicians. It resulted in the band being heard by musician and composer Paul Simon who immediately tracked Ladysmith Black Mambazo down and brought them to London to record the song 'Homeless' for his album Graceland.

When Nelson Mandela, after 27 years of imprisonment, became President of South Africa in 1994, he publicly stated that Ladysmith Black Mambazo were to be "South Africa's cultural ambassadors".

As the founder of the choir, Joseph Shabella said: “The journey that Ladysmith Black Mambazo has been on, was never a dream, a black South African could ever imagine”

Given the huge crowd who assembled to witness Ladysmith Black Mambazo perform on the Bowl stage at Pukekura Park and the rapturous reception they received, it’s obviously a dream that will never fade.

Recorded by RNZ Music. Engineered and Produced by William Saunders.