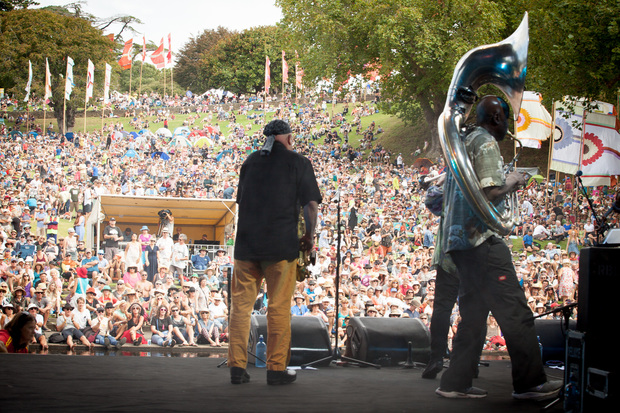 Gracing the Bowl Stage at Pukekura Park on what turned out to be a stunning Saturday afternoon is the New York City based band Hazmat Modine.

Hazmat is short for hazardous material while Modine is the brand name of a common industrial heater.

The eight piece band was formed by harmonica virtuoso and vocalist Wade Schuman in the late 90s and includes an eclectic array of instruments, including a sousaphone substituting for a bass player. 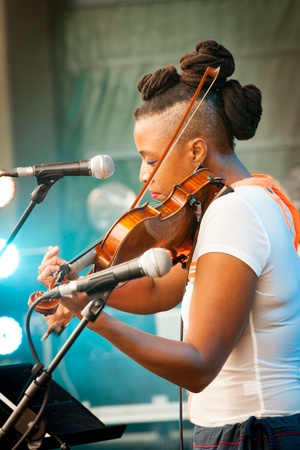 Their repertoire is informed by music from 1920s New Orleans jazz and swamp blues, jug-band, swing and any number of worldly diversions including plenty of gypsy and klezmer references and a dash of Jamaican rocksteady.

The band started off playing a Saturday night residency in a popular club in Greenwich Village and over the course of their musical life-time has released four albums.

During that time Hazmat Modine have collaborated and performed with a vast range of artists including Kronos Quartet, Cat Empire Bombino, and Natalie Merchant. Their music has also appeared in the Wim Wenders film ‘Pina’ and their second album ‘Cicada’ was awarded the Charles Cross award in France for blues album of the year in 2011.

The band tour annually on the busy European festival circuit where they have a particularly active fan base in Germany, highlights in recent years have included a spot at the Montreux Jazz Festival and gigs as far afield as Russia and Siberia. Considering they are not full time professional musicians and are reliant on other income streams, they really get around.