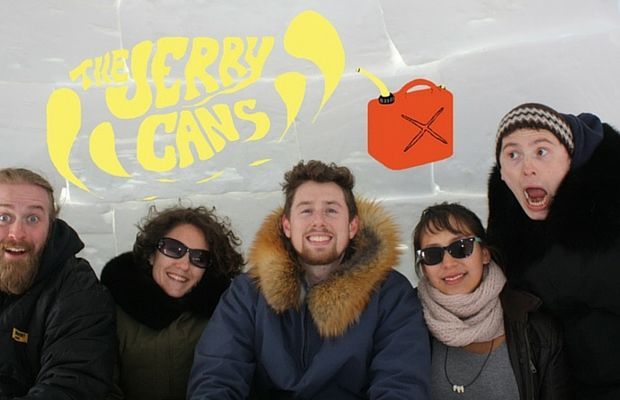 Trevor Reekie speaks with Nancy Mike and Andrew Morrison of The Jerry Cans.

The Jerry Cans are the band who arguably travelled the longest distance to perform at WOMAD Taranaki 2016.

They come from Nunavut 16,000 kilometers from the Arctic Circle in the sparsely populated territory of Northern Canada. It is only accessible by plane or boat.

Given that sort of remoteness, calling one’s band after something as essential as a Jerry Can holds an additional significance.

The band’s vocalist and guitarist, Andrew Morrison says the most important thing he does before he goes out on his boat or snowmobile is re-fill his Jerry Cans with gas. It's a necessary precaution for survival. Consequently the Jerry Can is a metaphor for freedom!

Nancy Mike, the band's resident throat singer told me it was probably about minus 30 back home as we spoke, covered in snow and ice and the month of March is shrouded by 21 hours of darkness. Music plays a big role in such an isolated situation.

The Jerry Cans create music that is inspired by many aspects of their surroundings and culture, performing many of their songs in their indigenous language of Inuktitut. Nancy has always spoken her indigenous language and didn’t learn English until she was 12. As Nancy said: "We're telling stories. The stories of our lives are the stories in our songs, living in the Arctic and the struggles we face". In an area so remote, a lot of young people struggle with social problems and even their identity. She says their job as a band is more than to just entertain, it’s equally about encouraging others to speak Inuktitut and retain their traditional values. “We’re trying to do things to reclaim our culture”.

Andrew adds “part of our mission is to try to be proud of the life we lead up North, and we encounter lots of different perspectives about hunting (seals), about indigenous and non indigenous relationships in our communities and we try and get those conversations happening. One thing that is happening in Canada is reconciliation where indigenous and non indigenous people are both coming together and coming to a place of understanding of a very ugly history...". It’s a place where there has been a lot of colonial and commercial abuse, so The Jerry Cans are committed to opening up conversation that encourages the ability to move forward.

Distance and remoteness brings with a host of logistics. For The Jerry Cans to operate as a business is very challenging. They have no option but to adopt a DIY attitude of being all things to themselves. Andrew: “It costs as much to come from Toronto to Auckland as it does for us to fly from our hometown to Toronto. It’s about $15,000 for us to get inside Canada…we have to fly everywhere in our territory cos there are no roads connecting any of the towns to us. Nunavut as a territory is one fifth of Canada, it’s massive, and has the lowest population. It's a huge land mass about the size of Australia”.