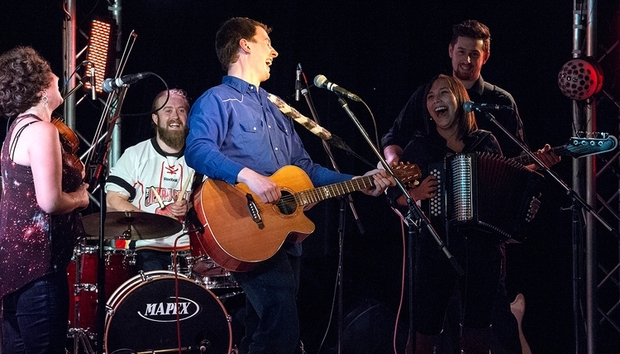 The Jerry Cans are the band who probably travelled the longest distance to perform at WOMAD 2016.

They come from Nunavut, a sparsely populated territory of Northern Canada that is only accessible by plane or boat.

Given that sort of remoteness calling one’s band after something as essential as a Jerry Can holds an additional significance.

The band’s vocalist and guitarist, Andrew Morrison, explained the most important thing he does before he goes out on his boat or snowmobile is re-fill his Jerry Cans with gas. It's a necessary precaution for survival; consequently the Jerry Can is a metaphor for freedom.

Nancy Mike, the band's resident throat singer observed  that while the band were enjoying a balmy March day in Taranaki, back home it was probably about minus 30 with 21 hours a day shrouded in darkness.

Music plays a big role to surviving in such an isolated situation.

The Jerry Cans create music that is inspired by many aspects of their surroundings and culture, performing many of their songs in their indigenous language of Inuktitut. As Nancy remarked "We're telling stories. The stories of our lives are the stories in our songs, living in the Arctic and the struggles we face"

Amazingly this is their 3rd visit to New Zealand and the band who have travelled so far to be here is committed to making it a memorable show for the WOMAD audience.