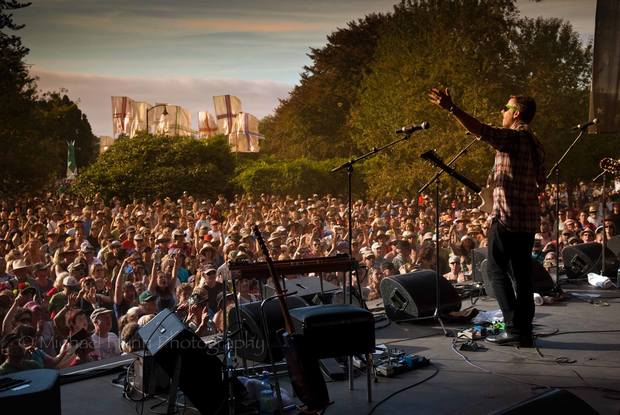 Trevor Reekie discusses collaboration and the music business with Joey Burns of Calexico.

Calexico played the closing slot on a star lit Friday night on the Bowl stage to a huge WOMAD 2016 crowd. The band have played in New Zealand on a number of occasions and never fail to deliver an entertaining show … it’s that kind of word of mouth that has seen their global  fan base grow exponentially.

Calexico also have a fondness for Aotearoa that is not only reflected in their music but also their own admiration for NZ music. Last time they played WOMAD NZ in 2010 Joey Burns gave a shout out to Chris Knox upon hearing of his stroke saying “Chris We love you so much, and your whole family, and we appreciate all the times you’ve put up with us, put us up in your house and your wonderful home".

That speaks volumes about the kind of man Joey Burns is.

Joey Burns, vocalist and guitarist for the Tucson, Arizona based collective Calexico is an affable guy. Relaxed, articulate and obviously well grounded, Joey and his musical partner, drummer John Convertino have helped Calexico become an influential band, who despite deliberately maintaining a place on the periphery of the ‘business’, have succeeded in in carving out a productive career on their own terms.

Did he ever consider that music might be a career? “No..I knew that I had a passion for music and I love to be involved with all aspects of music really. I did a lot of the band management and business early on and we were very fortunate to get to work with a lot of great independent labels In Europe and North America”.

Calexico have a motivated work ethic, touring consistently and collaborating with a huge number of bands and artists including the likes of Iron & Wine, Neko Case, Arcade Fire, the wonderful Michael Hurley, Band of Horses’ Ben Bridwell and many others. As a band they embrace collaboration with respect and creative curiosity. For their NZ show at WOMAD they invited Holly Fullbrook from Tiny Ruins to the stage.

For Joey collaboration “is a gift and it’s all about providing the most conducive environment possible so that you can have good recording session or performance – and it’s a challenge because every one has their ritual going into this sacred space of making music – and at the same time it can be very casual, and that's important too, and how do you combine those worlds that go with making music, or performance or feeling… there’s so many different ways that we approach this … we try to be really sensitive to the need of each song".

It’s little wonder they have fans across the world who appreciate their Latin-infused, alt-country sound and down-to-earth lyrics. Their mix of instruments and influences draw from a number of sources including Portuguese fado, 50’s jazz, 60’s surf & country twang and a hint of spaghetti western epics. Calexico are so obviously lovers of all kinds of music…. Joey himself conceded he has a magpie approach to music. There doesn’t seem to be many genres of music outside of his comfort zone.

One gets the feeling that Calexico as a band doesn't have a high turn over of musicians, meaning it’s a pretty cool bunch of people …"music and family ‘is a big part of what we do” – Joey frequently collaborates with his brother on lyrics. “Staying in touch with family means a lot… because you can go there and nothing will be held back (laughs) … my brother John is great. When he does come to a show he’s always got some great compliments and then points that he thinks could make the show or experience better".

One aspect of the Calexico business model is where the band has positioned themselves. Many artists are reluctant to discuss their business but Joey was very comfortable with the question of the ownership of the masters to their music. He responded: “Y’know, at a certain point it doesn’t matter any more because those masters are going to be around a lot longer than I am … the deal that we’ve made in all of our records in our past have been favorable to the musicians because we’ve decided not to work with major record companies, but with companies that want to make sure that artists are treated fairly … and we also put out our own records as tour only records with out takes from the studio, a live concert etc, so all these years that we’ve been doing the band and putting out proper records on labels, we’ve also been putting out records ourselves that we sell mostly at shows or a few copies on line”.

Asked if their business has changed very much since the Recording Industry has been challenged in the last 15 years, Joey concedes: "No, it’s still the same and we’ve been really fortunate to be able keep it the same… as you know it’s (the business) is dwindling over time so I’m even more grateful to have a 7-piece band on tour which is not cheap and not easy to maintain cos everyone has got their own projects in addition to playing with Calexico, or families, so it’s a real gift and I think being a Dad and doing this for a long time I’m really grateful to be here (in New Plymouth) in this corner of the world doing what we do for such a great festival and a great audience”.

Calexico are competently capable of captivating their audience, and 15 years of touring the world sees them maintaining their musical passion and integrity, to say nothing but respect for their fans.

Little wonder that the audience expectation was high for their Friday night performance at WOMAD. Listen to the show here: